To take responsibility for others…you gotta have faith. 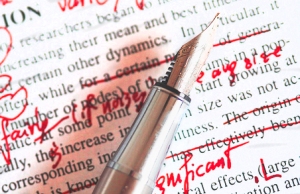 I am sitting here editing a young man’s novel and am feeling overwhelmed by the task. It is not a novel I would have ever read before because it is a science fiction story (kind of like “Lord of the Rings” meets “Harry Potter” meets “The Avengers.”) And I ask God, “why did  you choose me for this project?” Actually, the writer was referred to me by his uncle whom I haven’t seen for about 38 years. (He and I were friends in our high school years). I have edited several books now as a book coach. And with each project, I am blown away by the writer’s imagination and/or story and most of all by the trust these writers have placed in me. And at just the right moment, when I am feeling a bit wary of the task at hand, God encourages me through another. I received a phone call from an author whom I helped with my editing skills thanking me for being objective, straightforward and helpful with her memoir, which she said became a much better book with my aid. That was Friday…and now Monday already I feel overwhelmed again by the responsibility I face as I near the end of my current task. I pray and am reminded of the phone call Friday, of the story of Noah in a daily spiritual reading (just think, if we feel overwhelmed, how Noah must have felt being called to build an ark and save humanity!). And I’m reminded of Jesus’ message in Luke 12:48: “But the one who does not know and does things deserving punishment will be beaten with few blows. From everyone who has been given much, much will be demanded; and from the one who has been entrusted with much, much more will be asked.” Which to me says we can only do our best with what we know, but also not to take our responsibilities to others and to God lightly. I know if I can keep the focus off of myself and my own abilities or inadequacies and instead “go with the flow” of the Holy Spirit by asking for His help and guidance, and then to have faith in the outcome, I can do the task at hand, one day at a time. You can too, whatever your challenge today.

Will You Fit through the Narrow Gate? 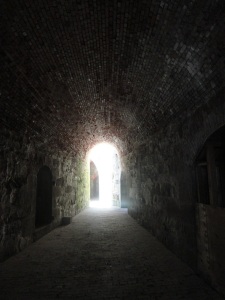 There is a lot in the news these days about athletes making big mistakes that get them in a lot of trouble. There’s Ryan Lochte, the Olympic swimmer who left Rio in disgrace after lying to the police about being robbed at gunpoint when in fact he was drunk and wrecked a public restroom. There are several football players from the University of Notre Dame (my alma mater) who are either being suspended or kicked off the team before the season even starts for a variety of misconduct and arrests for battery, gun and drug charges. It’s easy to talk about all of these young men in the spotlight, easy to judge them for falling so far, and to pity their parents. They say the bigger you are, the harder you fall, and that’s true, especially when you’re in the harsh glare of the media. As Jesus taught, we shouldn’t judge these young men but look at ourselves and where we fall short…as people and as parents. Are we doing all we can to avoid temptation, be good examples, be loving and forgiving,  and help our children walk the straight and narrow path? “Strive to enter through the narrow gate, for many, I tell you, will attempt to enter but will not be strong enough,” Jesus says in the Gospel (Luke 13:22). Often it is not our falls or failures  that count, but how we overcome them. Even the now-great Michael Phelps made huge mistakes at one point in his career, being arrested for a DUI. But he did the next right thing, went into a rehab, started over and made his way back to become the best Olympian of all time. Let’s pray for the athletes and others in the news who have fallen, that they pick themselves back up and get back on track…and pray for ourselves that we will keep striving to get through the narrow gate and teach our children to do the same.

Tagged as #God'sWordToday, #ModernDayBibleStories, Rediscovering the Bible in Today's World

Do You Burn with Fire? 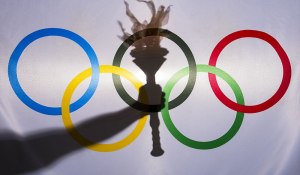 Have you ever felt like you were completely alone in your passion to achieve something great and wondered, why on earth am I working so hard when it seems like I’m not getting very far and no one else really cares? Surely at times that’s what the athletes at the Olympics must feel…they sacrifice so much in their young lives…when other teens are going to parties and proms, they are practicing night and day. And most, after so many years of struggle and sacrifice, never get the medal for which they strive. Yet they keep going every day because they burn with a fire that can’t be quenched. I know this “fire”…the drive to be “successful” as a full-time author of modern-day Bible stories, contemporary novels based on Old Testament stories that get across God’s message. I still don’t know what my “success” will look like – I don’t know if I’ll get any “medals” (like landing on the NY Times Bestseller List) or if I’ll even be able to make a living doing God’s will through my writing…all I know is I have to keep trying, practicing, striving. I believe this kind of “fire” is also what  Jesus talked about in this weekend’s Gospel reading at  Mass: “I have come to set the earth on fire and how I wish it were already blazing…and how great is my anguish until it is accomplished.” (Luke 12:49-53) Jesus tells us this fire may bring division, sometimes among friends or family members…who may think you’re a “Holy Roller” or just plain crazy to work so hard.  If you’ve found  your passion, your purpose to do God’s will and you burn with a fire that perhaps no one else really understands, don’t let it be extinguished by mistakes, failure, anguish or the misunderstanding, jealousy or disdain of others. Light it every day with prayer, hope, faith and self-love. Sometimes it will flicker precariously in times of doubt…but then there are times when a strong rush of wind – God’s power or even the praise and support of others – will help it burn bright again.  Just never let it go out.

What does God promise you?

How can we have faith if we don’t know what to believe in? I’ve been struggling with trying to have faith lately in just putting one foot in front of another now that I am working on my own as a full-time author/speaker/book coach.  Sometimes the “big picture” gets lost in the daily to-do lists and I feel anxious that I’ll never “get there.” But first, I have to ask myself once again, where is “there?” Of course the ultimate “there” is heaven, which is promised to all believers. But what about next month, next year, five or ten years from now? My dream, hope, vision is to continue to serve God’s purpose for me in writing Modern Day Bible Stories…contemporary novels based on Books in the Bible’s Old Testament. But it doesn’t deliver a pay check every day…at least for now. So I have to believe it will one day if God wills it. So that is what I choose to believe as God’s promise for me today. What do you believe God’s promise is specifically for you today? Once we can hold God’s promises for us in our hearts, I believe we can put our anxieties aside and achieve anything we set our minds and hearts to do! Look at all of the people who overcome addictions…there are promises specifically written for them in literature that was derived in part from the Bible. Or look at the Olympic champions on television this week…for each it all started with a dream, hope, vision, promise. There are literally thousands of promises in the Bible, but I picked two out of Joshua to meditate on this week:  “This book of the law shall not depart from your mouth, but you shall meditate on it day and night, so that you may be careful to do according to all that is written in it; for then you will make your way prosperous, and then you will have success.” (1:8) and “Not one word has failed of all the good things that the Lord your God promised concerning you. All have come to pass for you; not one of them has failed.” (23:14). How awesome that if we follow God’s Word and Will we are guaranteed success!

Stay silent or speak out? 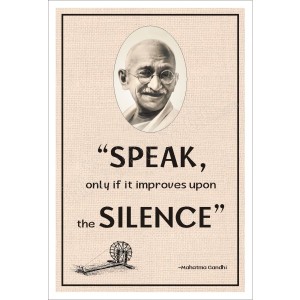 This weekend I attended a family gathering where I had the lone dissenting opinion when it came to matters of religion and politics, two subjects that are best left out of dinner table discussions but often come up anyway.  It felt like I was being teamed up against, when in fact, several family members just had a different opinion than I did on things like who to vote for in the upcoming presidential election.  My books are contemporary novels based on Old Testament stories in the Bible, so of course they deal with controversial topics like unfaithfulness in a marriage (in The Faithful One), right to life vs. right to choose (in The Peace Maker), and gay relationships and Islamic radical terrorism (in The Runaway Prophet)…and as a result, I’m sometimes questioned on my political and/or religious views.  You may be able to tell my relatively conservative Christian leaning in my novels, but I do try to be open to various points of view and not be judgmental of others, and I hope as a result my books are universally appealing to all readers. In discussions though, sometimes it’s harder for me to stay silent than to voice my opinion, and sometimes it’s easier, not wanting to “rock the boat.” During this particular discussion, I felt myself swaying back and forth from being defensive to almost feeling like maybe my beliefs were “wrong” and perhaps I should be ashamed of them (like Peter when he denied Christ three times before the cock crowed.)  I hope I’m never faced with a situation in which I am forced to stand up for my faith or else…like businesses that are being forced to choose between  their religious beliefs and keeping their doors open, or worse, like the Christians being slaughtered by Islamic State terrorists in the Middle East for their belief in Christ. I hope to learn from Saint Peter, not to deny Christ and my beliefs. And yet, sometimes, if you’re just getting louder without getting anywhere, it’s best to stay silent. (like Jesus did when facing the accusations of the Sanhedrin: “Then the high priest stood up before them and asked Jesus, ‘Are you not going to answer? What is this testimony that these men are bringing against you?’  But Jesus remained silent and gave no answer.” Of course, when pressed for the fourth or fifth time, Jesus does finally answer: “Again the high priest asked him, ‘Are you the Messiah, the Son of the Blessed One?’  ‘I am,’ said Jesus. ‘And you will see the Son of Man sitting at the right hand of the Mighty One and coming on the clouds of heaven’.” And then He was tortured and crucified.) Today I pray that I can remain silent when I know my words are merely coming from my bruised ego or will escalate an argument, but to stand firm and defend my beliefs when it really matters…and as Ghandi also says, to “hate the sin, but love the sinner.”

Tagged as #God'sWordToday, #ModernDayBibleStories, Rediscovering the Bible in Today's World